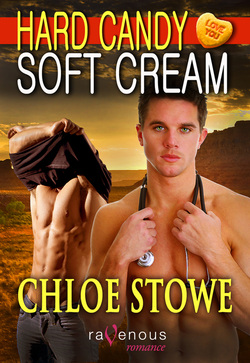 Join Mercer and Saul from the novel Hard Wood, Soft Heart in a standalone Valentine’s Day novella that will bring heat, tears and laughter to your cold winter days.

Mercer Braun is a former baseball player whose career was stolen from him by a chronic heart condition.

Saul Tidewater is a heart surgeon who moved to Las Vegas to escape a bitter divorce and the tragedy at the break-up’s core.

They’ve only known each other for nine months, but their love pulses strong and their passion burns magnificently.

But when a secret is kept on Valentine’s Day not only is the strength of their relationship put to the test, but their very lives are put at risk.

This is a story of how timeless love can rise up out of the ashes of tragedy.

This is the story of how eternal love is born and kept.

“Do you ever get a bad feeling about a day?” Saul Tidewater turned his head on his pillow and asked his lover seriously.

Both men lay naked under the covers of Saul’s bed, their legs intertwined, their hands softly roaming each other’s body. They had made love softly, easing each other’s orgasms out, coaxing the come from their cocks with long wet kisses and carnal nothings whispered into the skin. They had come only moments apart, their bodies more in sync with one another than either man dared to acknowledge.

Now, as the clock in the living room struck midnight, they were both drifting in the warm haze of afterglow. Sleep lingered in the corners of their consciousness, waiting patiently for the talk to run down and for the men to surrender to the sandman’s touch.

Thirty-two year old Mercer Braun yawned into Saul’s shoulder, his head nestled deeply on the doctor’s arm. With his short, sun-kissed blond hair ruffled and askew, Mercer lay curled up on his side, the length of his 6’2” frame plastered possessively to his lover. The stubble on his chin made delicious scratch-scritch noises against Saul’s skin as Mercer nuzzled himself deeper into his arms.

The men had only known each other for nine months; the last six they had known each other exclusively.  Mercer having never been in a serious relationship for such a length of time, and still fought pinching himself every morning in which he woke up to the all-encompassing love that was Dr. Saul Tidewater.

It had been less than three years since Mercer, a major league first baseman for the Pittsburgh Pirates, had learned that he had a chronic heart condition called an aortic valve stenosis. While surgery was able to repair his heart, the ailment had stripped him of his career. Fortunately, he had always handled his money wisely. When retirement was forced upon the twenty-nine year old, he had by that time established a substantial nest egg for himself, one that would require him to work only part of the year.

Moving to Las Vegas to take advantage of the weather and the city’s proximity to the spring training leagues in Arizona, Mercer had opened a hitting clinic for professional baseball players which he ran out of his house in the winter months of baseball’s off season. The venture had been a roaring success. The rest of the year he volunteered with kids, coaching their little league teams and mentoring them both on and off the field.

Mercer Braun’s life was still good, but it was different. The heart condition had to be monitored regularly. While he had received a replacement valve, it was scientific fact that the valve would eventually wear out. Of course, another valve would then be inserted, but each surgery, each replacement got riskier as its odd for success got smaller. Mercer had learned to live with the realities of his future. His lover, a cardio thoracic surgeon, however, had not.

Saul Tidewater always remembered Mercer’s limitations. He always made sure that Mercer didn’t push himself physically too far, made sure that the former ballplayer was never far beyond a doctor’s reach. Honestly, it was sometimes annoying as hell, and Saul’s well-meaning but firm limitations he’d set had forced Mercer to give up some of the activities in life he had cherished the most. The almost daily dawn to dusk hikes in the desert that had filled Mercer’s empty summer hours were now a thing of the past. Sometimes, Mercer missed those days terribly.

He, however, bent to Saul’s wishes out of an ever growing love and inextinguishable passion for the heart surgeon. Mercer’s condition scared Saul and rightfully so. While Mercer lived his life from day to day, soaking in as much life as God allowed him, Saul often lived for the future. Their future. It was a difficult balancing act both men had to play in their relationship. It was fragile and both feared it could so easily be broken.

“No,” Mercer answered Saul’s question with a sleep-beckoning sigh. Every day was a blessing in Mercer’s book, so no day could possibly be tagged as bad. He knew he wouldn’t win that argument though, so he shelved that discussion in hopes of a sex-drowsed nap. “Why? Do you?” he asked as he nuzzled his nose into Saul’s shoulder.

“Yeah,” Saul replied half distracted by something Mercer was too tired to name.

“Bad feeling about today?” Mercer raised his head up off of his shoulder just enough to meet Saul’s gaze with his own. Saul had the most spectacular deep hazel eyes, with his rich black hair they sparkled devilishly in his face. Mercer could literally stare at Saul all day and never tire of a detail. Unfortunately, sleep was a necessity no man could completely ignore. Another yawn caught Mercer off guard then, but he refused to relinquish the connection until an answer to his question was given.

Saul shrugged his free shoulder and forced a small smile that was no doubt for Mercer’s benefit alone. “I shouldn’t have said anything. I’m just tired.”

“You sure?” Mercer asked, planning to go back to this subject once his brain was more awake than asleep.

“Yeah.” Saul craned his neck down to give his lover a kiss on the crown of his head. “Go to sleep.”

Mercer needed more than a nice peck on the noggin though, so he took it. Maneuvering himself farther up Saul’s long, lean body, Mercer sloppily devoured the doctor’s lips with his own.

A sleepy-eyed Saul gave as good as he got.

The kisses were messy and loud and lacked all grace, but they were still perfect.

Saul smiled as he combed his fingers lovingly through Mercer’s hair. “You’re right. It is.”

Heavily, Mercer dropped his chin to the doctor’s chest. He looked blearily up at his lover and asked rather dopily, “Can I go to sleep now?”

Running a hand reverently down the side of Mercer’s face, Saul said softly, “Dream away.”

Mercer grinned, turned his head to the side and down just a bit so that the sound of Saul’s heartbeat was all he could hear, and mumbled in one last final breath of awareness, “Love you.”