Shafts of Torchlight, Book #3 in the Hellesgate Series... 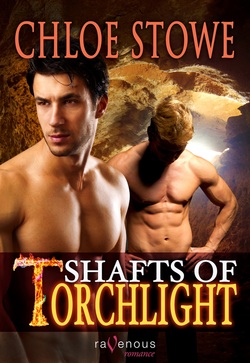 It’s Christmas night in Hellesgate, Kansas and all the world is bright.

Former New York real estate mogul Matthew Archer and injured war hero Cane Summerfield are enjoying their first holiday season together with their adopted daughter, Sahara. While the men had endured many hardships on their paths to discovering one another, their lives had finally grown peaceful while their love had only grown more vibrant…

An estranged family member with a heart of ice, a buried past that lives in a murderer’s hungry gaze, memories born of sweet violence and delicious pain… all must be met and overcome for Matthew and Cane to keep the lives and the love for which they have fought so fiercely.

However… when the path is darkest, it takes only the smallest shafts of light to lead a man home again.

The bedroom was bathed in light. The two French doors that led out to a small balcony lay open, an uncharacteristically warm December breeze tiptoeing in gently, fearing to wake the woman who slept so soundly beneath the pale yellow duvet. It chose in­stead to weave its fingers through the ivory gossamer drapes, mak­ing them rustle and dance across the beautifully weathered planks of the old wooden floor.

A low gentle hum of river traffic on the Seine drifted in on the coattails of the enigmatic winter wind. The Eiffel Tower stood close on the horizon, a sentinel keeping watch over its jeweled barely waking child.

Footsteps both heavy and sure, stole down the brief hallway and into the bedroom. The man stood in the doorway breathing and watching for long minutes. Slowly his hands moved to the buttons on his dress shirt, swiftly releasing the clasps and allowing the ma­terial to fall off of his shoulders and onto the floor. His pants soon followed, along with his shoes, socks and black boxer briefs.

Allowing the sun to play softly across his skin, he touched himself.

Rain slapped the window. The reflection of the Eiffel Tower in the glass lost all definition melting into just a stain of orange light.

“Please,” a man’s voice broke with the lightning.

The French door slammed shut as the wind keened, running through the streets like a banshee fleeing hell’s fire.

“On the floor,” Frye Wheelock demanded, steel lacing the words with something cold, hard and ungiving.

A cat scampered off of the balcony and into an open window next door.

“Are you going to do it?” the naked man kneeling on the rug begged. His fingers were locked together behind his head, the dark strands of his hair brushing against the white knuckled grip with every whistle of the wind.

The window in the small kitchen shuddered as it hung open and exposed to the fury of the Parisian spring storm.

The man stayed, ass in the air, face flat to the black and white parquet.

Thunder roared through the third floor apartment, rattling the antique mirrors hanging as witnesses on the dark red walls. A por­trait of du Sade smiled approvingly down on the scene.

“Are you man enough to handle me?” Wheelock in his black leather boots and black leather pants circled the figure who trem­bled at the sound of each booted step.

“Yes.” But the answer was swallowed by a crack of forked lightning. “Yes!” the man yelled over the storm.

“Have you had a man before?” Wheelock’s fingers dragged over the raised buttocks, the nails scraping and marking the un­blemished skin.

“No,” The answer came with a tortured hesitation. “But, I’ve wanted…” Shame strangled him from admitting more.

With the force of a beast enraged and infuried, Wheelock sent the flat of his hand hard into the quivering cheek. “Enough!” he roared, as he grabbed the man’s hips and forced him to remain. ”You will not run.”

“Perhaps it would be best if he did?” A woman’s voice from the room’s corner strained to remain a whisper.

“Perhaps then you could catch him, punish him even more for his insolence?” From the woman’s side, a man’s voice shook in climbing sexual excitement.

they no doubt huddled in panting need across the room. They had been instructed not to say a word once the highly priced perfor­mance began. They had been told only moans of arousal, keens of orgasm were allowed once they’d entered Frye’s studio.

They had broken the rules.

Frye grinned down at the naked man ass-high on the floor. Garin Verdunne, Frye’s lover and employee of two years, would pay for their bad judgment. His cheeks would pay to the flogger. His hole would pay to Frye’s dick. And maybe for all this paying, a nice beefy tip would be had...and Garin and Frye could spend the rest of their day in bed, indulging in Champagne and making slow, dirty love until dusk.

Frye Wheelock, with need twenty years ripened now dripping from his cock, slipped into the luxuriant bed where the woman slept. Wrapping his arms lovingly around her still petit waist, he set his lips upon her nape and began to suckle her like a hungry child.

The woman woke and smiled. “How was your flight?” she asked groggily as she turned in his arms to face him. Her hand gently caressed the stubbled face.

“Long,” Frye nibbled on the skin of her shoulder revealed by her nightgown, “But worth it to get back home to my new wife.”

“Hmmm,” she nuzzled into the side of his neck. “Hardly new. It’s been four months.”

Frye’s tongue danced across the long white line of her col­larbone as he smiled up to her. “You will always be new to me, Arlette Archer.”

“Arlette Archer Wheelock,” she corrected beneath a sleepy smile.

“Are you ever going to tell your children about us?” Frye rolled her over onto her back and kissed her soundly. “Or am I just your dirty secret?”

Arlette laughed into his lips. “I’ll tell them.”

He laid his body gently down upon hers and prodded, “When?”

“Soon,” she gasped as Frye pressed his hardening cock against her thigh.

Shaking his head, he started to undo her nightgown, revealing the soft flesh of her breast.    “When?” he asked again.

She sighed happily but relented as her nipple was sucked be­tween her husband’s lips, “Now, but I tell them in my own way.” Her last coherent words of the morning were a mumbled, “What time is it in Hellesgate, Kansas anyway?”