Taken... a novel by Chloe Stowe 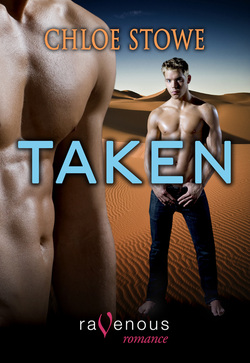 The Marrakech sun bled down on Michael Brighton as he bathed nude in its warmth.

"Home," his lips blew the word silently into the spice-scented breeze.

He was a student of all things old. His life had been one of saving the condemned, of bringing life back to the stone cold dead. His calling was noble. His love was not.

"Gareth Reed," like a lovesick fool, he whispered the name just to feel the taste of the man on his tongue.

Gareth worked construction, in his spare time he dug lives out of disasters' rubble. Urban rescue was his calling. Michael Brighton was his love.

Theirs had been a story of stolen hours, of games adults play, of futures locked away behind cold wedding bands.

Theirs was a love that had no right to be...

So a madman took it away.

Beneath that very Moroccan sun, with the name of his lover still ripe on his lips, Michael Brighton was stolen away....

When the love of a man's life is taken away, he is left with only one choice... Gareth Reed takes him back.

Stretched atop the low adobe wall of the villa, glistening drops of pool water covered Michael Brighton's lean form. His chest still heaving from the exertion of a five mile swim, the twenty-eight-year-old lay flat on his back, his sun bronzed hair cushioned on a jewel-toned towel. One leg was stretched out flat in front of him, parallel with the wall, while the other was bent perpendicular, allowing his lightly tanned toes to tap idly on the baked sand. A carefully applied layer of cocoa butter covered his flawless skin, which stretched taut over perfectly sculpted muscles. His right arm hung lazily down, fingertips trailing gently through the adobe rubble, while his left arm was drawn up to his body, the hand lying on his bare hip. A long, thick cock rested on the smooth skin of his stomach, unresponsive to the nearness of his fingers. From behind the shelter of his closed eyes Michael faced the African sky and smiled. As always, it was Gareth Reed's face that greeted him in the darkness.

The smells of Marrakech, even four miles away, lingered on the dry air like cologne on the shirt of a lost lover. Michael breathed them in, filling his lungs with saffron and thyme. His ears strained to hear the distant calls of the souks.

Michael's journey to this sun-saturated desert had not been an easy one. The road at his back was long and twisted. The memories, however, were already losing their rougher edges. The most jagged corners had already been blunted by time, miles and heat. It was a miracle, really, that Michael Brighton could lay there and smile at all. It was a miracle born solely through the love of one man...

"Gareth." Like a love sick fool, Michael whispered the name just to feel the taste of it on his tongue. His cock awoke, twitching lazily in the sun. As he reached down and began to roughly palm himself, the gold band that encircled his ring finger caught the sun's light...

Across the sands, a curse rang out.

"Damn!" The man behind the binoculars winced as the ring's reflection seared his eyes. Tossing the offending instrument back into the duffel bag, he muttered angrily to himself and continued to make his way across the dunes.

Meanwhile, with two hands, Michael jerked himself off like a pro He pumped his dick through the ring formed by his left forefinger and thumb with practiced ease. His right hand was not idle, either; his fingers pressed paths from his navel down to the base of his engorged member. The archive of memories he drew from were varied and hotter than the enormous African sun. Images of tensed thighs and powerful shoulders flashed across the lids of his closed eyes in crisp color and dizzying detail. Michael could even smell the leather of the horsewhip....

Knuckles turning white as the tips of his fingers dug into steel, Gareth Reed hung from the beam with a grimace and a moan

"Do it!" Gareth snarled as he sent a murderous look over his shoulder. "Do it, or I'll strap you to this fucking thing myself, goddamn it."

"Promise?" He replied in a tone edged with mischief.

"Mi..." the name was wrenched off of Gareth's tongue with a gasp. Blood dripped down Gareth's chin as his teeth clamped over his bottom, lip stifling the scream the lash of the whip had drawn from him.

Michael's breath hitched as the remembered scene changed, and roses flooded every sense of his memory...

"Ouch." Michael plucked a thorn out of his thigh.

"Keep your ass on the blanket, then." Gareth mumbled irritably around the hot piece of flesh in his mouth

"Huh?" Michael grunted with a smirk as he continued smothering Gareth's cock with butterfly kisses.

Insight hit Gareth like a punch to the gut: Michael was making him talk on purpose. The vibrations of vocal chords on cock must be delicious... "Suck me, you... you... fuck!" Gareth growled in spiking frustration.

The whole length of Michael's body twitched pleasurably at the reverberations of growled command on dick. Breathlessly, Michael informed him, "But I'm kissing you." Even his dick seemed to project a pout.

Gareth bit down on Michael's tender flesh just a little too hard. Nobody was pouting now.

Gareth snickered. "Suck or I bite."

"Bastard," Michael declared with a smirk as they flipped over and he commenced all-out sucking. Michael smiled as he reached around and picked a scarlet rose petal from Gareth's clenched ass cheek...

Engorged to the point of pain, Michael slowed the rhythm of his pumping just enough to give him time to conjure up one last, favored memory...

Warm cotton sheets gently cradled Michael as the skyline of New York City twinkled before him.

"Not a word," Gareth whispered hungrily from behind. Michael shivered as the man's breath ghosted across the nape of his neck.

The bed moved as a bare arm was draped across a bare shoulder. Michael was pulled closer

"Nothing but me..." the calloused hand reached down and cradled Michael's balls, flicking the awakening cock with his thumb, "... worshipping you."

Upon the sun-drenched adobe wall, Michael Brighton came long and hard. The sound of the back gate creaking open went unnoticed by his blood-deprived mind, and as the warm cream coated his trembling abs, a shadow moved noiselessly around the turquoise pool.

Like waves washing out to a calmer sea, the shudders after his violent ejaculation receded slowly. In minutes, Michael knew, his body would descend into the rag-doll nirvana of utter exhaustion. Propping himself up on his elbows, he shook his head, trying to fend off the post-coital lethargy for a few more moments. He had to clean himself up. Lightheaded but determined, Michael fought the whispers of sleep and swung his legs to the side as he pulled himself upright on top of the wall. Not trusting his eyes to refrain from spinning the pool's water into a dangerously dizzying canvas, he kept them firmly shut. He reached blindly to his side for the jewel-toned towel that had been his makeshift pillow.

A needle slid into his arm.

Eyes flying open in alarm, Michael caught only a glimpse of black leather before he was hooded from behind.

"What the fu..." Michael's voice slowed to a slur. Whatever the drug was, it worked quickly.

Strong arms tightened around his bare chest, securing him in an unbreakable grasp. Michael tried to struggle, but it took only a moment for the narcotic to steal even the fleeting hope of escape away. His head immediately grew too heavy to hold up and flopped limply back onto his attacker's shoulder. His last coherent thought before the drug stole him away was simply a one-word prayer...

With that, Michael Brighton was taken into the darkness.