Peak and Thrust by Chloe Stowe... 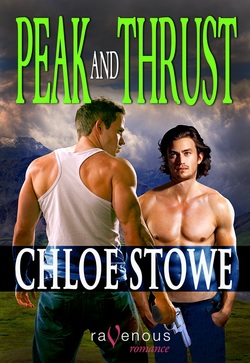 "Happily ever after's" rarely came to men like these...

Joey Ballios was a cop. For ten years his life had been little more than long foot chases through the cold Detroit snow, piles of paperwork, and forty hour shifts.

Laird Fox climbed mountains. He was a mountain guide in Alaska, a man who spent his days taking strangers to the top of the world, fulfilling their dreams while ignoring his own.

The two men's lives should never have touched, their worlds never have crossed, but when three gunshots ring out in a sweltering summer night, some lives are cursed while others are saved...

Sometimes Fate arrives on tragedy's tail, a post-script that begins with "Once upon a time."

He blamed the beer guy. Or the beer delivery guy to be exact. Laird had been perfectly fine and unencumbered by a penis with delusions of grandeur until Mr. Firm Ass in the khaki shorts had walked in the door.

Laird had never seen the man before, couldn’t describe anything about him even now except the curve of his sweet butt. That ass had driven him crazy. Literally, apparently.

He closed his eyes and checked again.

Nope, it was still there. Or maybe he should say they were still there? Because there were definitely two people in the damned fantasy. That even after an hour, the beer guy’s departure still was scorched to the inside of his eyelids and had Laird as hard as an infernal rock.

Picture it, because that’s all Laird Fox could do…

Beer guy draped over the long dark bar, his white ass cheeks creamy and smooth pinned against the polished mahogany, open and waiting. The mere shadow of a puckered star playing the deep, tight bulls eye on the target.

Laird’s cock out, swollen and red and hungry. A single drop of pre-come sitting on its bobbing head like a luscious, lustrous pearl.

Reaching behind him, the beer guy pulls his own cheeks apart, holding them open, offering himself to Laird and his needy girth.

But just as the tip of Laird’s shaft brushes the outside of the stranger’s star the whole vision dissolves into a deep throated moan of loss, leaving Laird with nothing but a ripened dick and no warm hole to stick it.

Now, the beer guy was gone. Only the hard-on remained. It was a sad state of affairs in Caribou Point, Alaska. And all Laird could think was that it was going to be one hell of a long day.

With a long suffering sigh he turned his face into the dappled light and prayed for just an inkling of understanding.

Laird Fox was straight. With a gentle stretch of the imagination he could even be called a heterosexual giant. He had never looked a mans way his entire life until… well, until eight months ago when said giant got his heterosexual ass handed to him by his very female ex.

What had begun as just general thoughts of malaise about his frankly pitiful dating history had turned over the weeks into a burning need for something different, something more, something with its own penis attached. It confused the hell out of him, but it didn’t so much as scare him as it excited him. It was a whole new playing field Laird was contemplating, a whole new territory that needed exploring, deep and earnest exploring. Unfortunately, Rough Camp was a little thin to the point, essentially bare of all prospects for such deep drilling exploration. In other words, as far as he knew, he was the Caribou Point gay community. Yeah, and he hadn’t even ever kissed a guy. What a crock of crap.

He squinted as the midday sun streamed in through the windows of Scruffy Morgan’s Café and Bar, turning Laird’s dirty blond hair a golden hue and his eyes a brilliant sapphire blue. Sporting a dark red flannel shirt, an old pair of worn jeans and a well-practiced look of peaceful disinterest, he hardly looked the part of a man on the verge of coming in his pants.

Thankfully, Scruffy Morgan’s was comfortably empty. The tourists that had come to Caribou Point, Alaska for a chance at grabbing a taste of modern day adventure had found that taste elsewhere this afternoon. Only Laird and a couple of other locals

dotted the dark leather-covered booths, the knotty hardwood floors and the long mahogany bar with signs of life.

Scruffy Morgan’s was an establishment in tiny Caribou Point. Folks viewed it as the grand old dame of the mining town turned tourist summer mecca. Only five hundred people called the little town home year round, most of them old timers who had never known anything different than the God awful winters and the sparkling warm summers that defined Caribou Point as much as its spectacular mountain scenery. The rest of the citizenry was made up of professional mountaineers, guides and the like. These men and a few hardy women drew their life and their income from a pure love and respect for the land. They were a rare breed, and Laird Fox was among the rarest.

Born to a lifetime mountaineer himself, Laird had embraced the sometimes lonely lifestyle with his whole heart and soul. He had travelled the world and scaled all its most daunting peaks. The thin air of the Himalayas, the Andes and the Alps had all thickened his blood from his earliest of years. The mountain ranges of the world had literally been young Laird Fox’s playground. The boy and eventually the man had played the peaks hard and learned many of their strongly held secrets.

Those secrets were now what sustained Laird.

Ten years ago he had returned to his birth home of Caribou Point and set up a small adventuring company. Fox Tracks Mountain Co. had grown into a tremendously successful venture over the years. There were month long wait-lists for his services. His contagious amiability and his all-consuming love for the mountains had made his company one of the most popular outfits in Alaska.

Pushes for him to expand the company and to take on other guides had finally died down as people learned just how stubborn Laird Fox could be. He didn’t want employees. He didn’t want a new partner. His last associate had left his heart in shreds. He was never putting himself out there like that again. As far as Laird was concerned Fox Tracks would remain a one man operation until it closed its doors.

His retirement, however, was the least of his concerns at the moment. His fucking… no, correct that, his non-fucking dick was driving him crazy.

As sad as it was to say, there was only so much jerking off a grown man could do.

His dick twitched in rebuke.

Laird ignored it with a scowl.

Sighing at his lot in life, he went back to pretending that everything was A-Okay on the Fox front.

Some sports nonsense was on old Scruffy’s radio. Laird tuned it out as always. All of his considerable concentration, at least as far as the consuming public was aware, was on the topographical map spread out on the bar beside him. The name Mount Carbine was scrawled across the top of the yellowed, oft-folded paper. On the line below, scribbled out in a different, bolder hand, were the words: "First Ascent: July 18, 1966. Gunther Fox." In the same pen a route was sketched out across the mountain’s side. It was this line that Laird’s finger slowly followed as a wrinkle of concentration grew across the handsome tanned face.

While earning his keep by taking wannabes and tourists up along beside him had its sour points, most of the time Laird truly enjoyed showing off the beauty that was Alaska. In fact, the only thing he liked better about his job was loading those same newbies back on their little planes at the end of a journey, satisfied in the knowledge that they were still in one piece. Although like many of the top guides Laird was a licensed EMT, he particularly prided himself in the welfare of his clients. In his ten years of guiding, not one of his tourists had so much as cracked a pinky finger or suffered more than a skinned knee.

Gillian had called him obsessed with the "safety stuff."

Gillian had also been fucking him for eight years, so her views had tended to be skewed toward hard truths. It was one of the reasons Laird hadn’t been able to bring himself to marry that beautiful irritating woman.

Admittedly her desire to settle down, move to Missouri and have lots of babies had been the breaking point. He couldn’t understand how she could just give up the mountains. She had loved them as much as Laird in the beginning. In fact, it was two years of watching her passion for climbing blossom that had led Laird into asking her to be his business partner, not to mention bringing her into his bed.

Laird was an old fashioned kind of a guy when it came to women. He had only slept with three his whole life. There had been Angela, his homecoming date in his junior year of high school; Veronica, his own personal version of Mrs. Robinson in college; and for the last eight years, Gillian.

Laird liked learning a body. He liked discovering a woman’s ticklish treasures and all of her hot spots. This kind of knowledge, however, took time. In fact, it took years. One night stands couldn’t compare to voraciously reading a lover like a much beloved book. That knowledge took years of dedication. Laird was prepared to give just that, as long as he didn’t have to give up his mountains to do it.

It was when Gillian had left him eight months ago that Laird had found himself doing some hard re-thinking of the whole love/woman thing.

A lot of re-thinking…